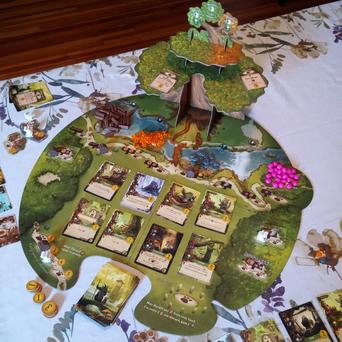 Everdell is a fantastically fun and aesthetically beautiful game. It’s all about small woodland creatures building a society utilizing worker placement, resources, and a shared deck of cards. This assortment of components provides players with many actions to choose from. A player’s worker can gather resources, draw more cards to add to their hand or complete a contract. Their cards in play represent a civilization of Construction and Critters capable of unique actions.

The term “tableau building” refers to a player’s collection of cards in play, which affects their action selection. Truly, the term is unnecessary and muddies up what gamers already understand. It’s the same as playing Magic the Gathering and labeling all of the permanent cards in your control as a “tableau” since the cards affect the quality and quantity of actions accessible to a player. The term “tableau building” provides nothing new, therefore requires no special title, and is not a unique mechanic.

An exciting aspect of Everdell that provides vast replayability is that it uses a variable setup, meaning that the game is different every time you play. During setup, special Forest Locations are drawn at random and placed on the game board to provide powerful actions to workers outside of the Basic Locations that exist. Additionally, Special Events are randomly drawn and placed on the giant cardboard Ever Tree. Special Events are contracts that provide victory points upon fulfillment; they require specific Construction and Critter cards to be played in a city before a player can acquire them by placing a worker on the event. Basic Events are the same in each game, requiring less specific types of cards to be played in a city to be achieved. Lastly, there is a Meadow on the board available to all players, like a bank or universal hand of cards, filled from the shared deck at the beginning of the game with eight cards.

The giant cardboard Ever Tree prop looks excellent and is fun in theory, but it’s a bit of a pain when putting it together and taking it apart. The cardboard is very susceptible to bending and fraying at the points where they slot together, so you really don’t want to keep constructing and de-constructing it; ultimately, the monstrosity lives fully assembled on a shelf at all times.

Like in many games, going first is important; it means you have the first choice of all the best options. When going first in Everdell, players will likely place their worker on one of the Forest Locations due to their exceptional production. That Forest Location will not be available again until that worker is removed. This problem is usually remedied with the claim turn order mechanism, allowing any player to claim going first next round so that they can take the best location next time. Fascinatingly, Everdell uses a sort of fusion between action retrieval and claim turn order: the process is referred to as - Prepare for Season. When preparing, players get all of their workers back, gain new workers, and receive bonuses, but it costs an entire turn, like action retrieval. Plus, that player enters the next round, ready to play their workers on the best locations as soon as they become available, like claim turn order. This progression is a fun and strategic way to implement a fixed number of rounds as players are in complete control of when the rounds come to an end and don’t have to wait for other players to make it to the next round. Each player can simultaneously be in a different round, either Spring, Summer, or Fall (it depends on how you play out your actions).

It’s strange and intriguing that players can complete Seasons, or the entire game, at vastly different speeds. The game ends once all players have completed all four rounds at their own pace. The winner is determined by counting up all of the Victory Points achieved through various means, and the player with the most wins. Victory Points are earned via worker locations, Basic Events, Special Events, and the Construction and Critter cards in a player’s city. While not every card provides points, they harness great abilities, and there are many ways to manipulate your city throughout gameplay. The most that an opponent can alter your city is by adding the Fool, which reduces your point total by 2. Due to this limited player interaction, it can sometimes feel like you are independently playing the game. Though, plenty of competition can arise from the game’s many zero-sum situations, such as limited locations, events, and cards in the Meadow. All in all, Everdell is an innovative and enjoyable worker placement board game. 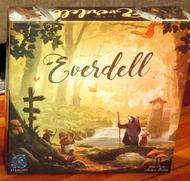 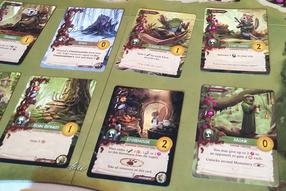 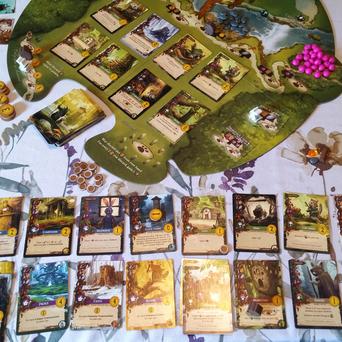 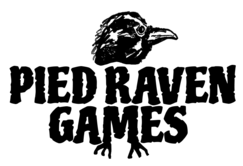 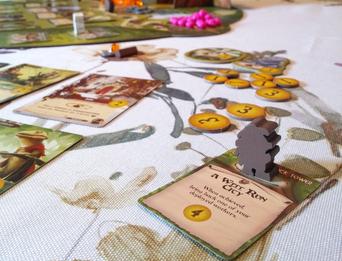 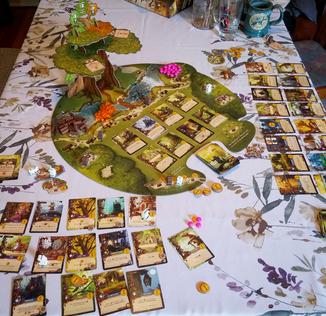